You have to check this out:

This is my favorite airplane landing I’ve ever taken.  Granted, this is not video we took ourselves, but we’ve experienced this just the same – maybe on a bigger plane.  This landing means that you’ve made it to St.Thomas.  You’re going to step out of the plane directly into the sunshine.  You walk down the steps, go through security, find a taxi, ride to the ferry, and continue across the beautiful water to St. John.  Beautiful!

At the moment I’m posting this, it is 81 degrees and sunny in Cruz Bay, St. John.

It took until right before I graduate, but

I officially have a MySpace page!

My hair is long enough to cut & donate to Locks of Love.  I’ll be going through with this feat near the end of February in honor of Charlotte Rich’s birthday.  Shh…it is a secret from Charlotte!!

Check it out (ignore the reflection of the flash off the tile): 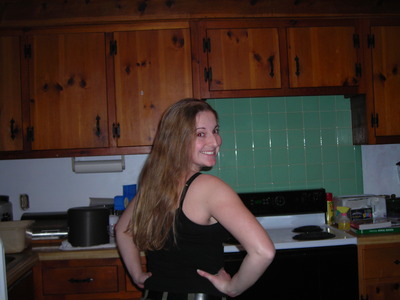 So, School Has Started…

School at VCU started this week and I am really enjoying my classes so far.  It looks like I’m going to graduate in August – finally.  Hopefully I’ll be able to get my last two classes in around my work schedule this summer.  It may be REALLY hard!  I may be pulling my work hours at night and on the weekends.  My boss is going to L-O-V-E that!

So, I am retaking TEDU 562, “Reading to Learn in the Content Areas”.  Last semester was lethal with a teacher who does not like having math majors in her class.  I’m a math major.  Around Thanksgiving, I realized I wasn’t going to get out alive.  I had two options: Take an incomplete and resubmit every assignment that hadn’t lived up to her literary background, or take fail and take it again.  Against all better advise, I took my second option.  Because it is a 500-level course it will stay on my record.  Hopefully getting a better grade this semester will help support my “bad semester” theory.

Jeff and I will be married 8 months on Saturday.  Pretty cool, eh?  I think so.  I really enjoy being married to him.  He makes me laugh so hard at the oddest things and times.  And about things that no one else will find funny.  He’s really my best friend.  That’s so nice!

Speaking of best friends…Jay, Mo, Jeff, Me & Ronnie went to IKEA this past Saturday to buy big house stuff.  We’re gonna do it again when we’re both ready to do our kitchens.  It was a trip.  Ronnie is really blending happily into our “group”.  On the way up, we were listening and singing to the radio.  Apparently, Ronnie and Mo dance in the car all the time.  Since Jay was driving and Jeff had shot-gun, I got to participate.  It was a blast.  We were grooving away behind the “men”.  Not that Ronnie isn’t a man, but he really blends well with Mo and I.  We can be really silly and goofy and he plays right along.

For those of you who don’t know…Ronnie is a friend of Jay & Mo’s from Cincinnati.  He was hit by a car nearly two years(?) ago – run over actually – right after Jay & Mo moved here.  He has been like Mo’s “family” for quite a while, so they really stepped up to care for him.  Eventually it was decided that Ronnie needed a break from life in Cincinnati and where better to take that break than with Jay & Mo here in Richmond.  None of us knew Ronnie, but we’d all be praying for him since his accident.  I joke often that we couldn’t remember life without Jay & Mo.  I now feel that way about Ronnie.

Friends rock.  I have good ones.  How about you?

I love historical events.  A president’s funeral is no exception.  I sat and watched CNN for an hour straight on Saturday just watching the mourners pour past President Ford’s casket in the Capitol building.  I did the same during Reagan’s time lying in state.  I wish I could’ve have gone, but it has not been feasible either time.  Poor Rachel and Warren returned to my house Saturday evening only to watch the re-airing of VP Cheney’s remarks for the service at the Capitol.

This morning was the state funeral.  I did not get to see near as much as I wanted to, as I had a meeting at 11:00.  I was born in 1978 so Ford’s time as president did not have a direct effect on me.  I’ve only known him from my history classes – most of which I have narrowly escaped from with a grade of a C.  I’m not good at History.  Dates, places, times and names do not go anywhere logically within my brain allowing me to recall them in proper arrangement.  I have, however, always been intrigued by Ford.

I enjoyed reading about how he handled being President and have always enjoyed hearing the stories about his children.  The past week has been full of touching moments looking back over his life and the photographs of he and his family during that time.

Only one moment brought me to tears.  It occurred this morning.  They removed his body from the Capitol and placed it in the hearse to carry it to the National Cathedral.  From there, the procession travelled past the White House and to the Cathedral.  There were many moments along this way that moved various people, but the one that got me best was when our current President, W, escorted Former First Lady Betty Ford into the Cathedral.

President Bush had Mrs. Ford’s left hand in the crook of his right arm.  I immediately thought of a wedding.  Though they had not yet brought in President Ford’s casket, all I could think was, “One day, 59 years ago, Mrs. Ford walked down a similar aisle, perhaps on the arm of her father just as she holds the arm of President Bush.  That walk down the aisle led her to marry the man of her dreams.  This walk leads her to say good-bye to him.”  I immediately began to weep.

Maybe it is all the wedding exposure I have had this year.  On May 20, I walked down the aisle of my church holding my daddy’s arm.  At the end of my aisle was Jeff Cronin.  What an incredible journey that walk was!  I was so excited about the long married life that we had before us.  On October 7, Rachel Ledbetter walked down a long aisle on the arm of her daddy to marry my baby brother.  I couldn’t contain my emotions.  It was so surreal.  That walk that a girl takes down that aisle to marry a man begins an even greater journey that often ends in nearly the same way – a long walk down an aisle to your groom, but this time he is gone…

It took me several moments to compose myself.  I know that the symbolism would be even greater if his casket was already up front, at the end of that aisle, but the thought is still the same.  I cannot imagine taking that final walk down the aisle to my groom – nor do I want to.  Today, however, made me think of that moment that lies someday in my future.  Hopefully far away in my future.

Will I have as much grace as Mrs. Ford?  Will have as much composure?  At this point in life, all I can think is “No”.  I wept in the hallway before walking down my wedding aisle.  I wept in the middle of my vows.  I admire these great women – these wives of our Presidents – for the examples of composure and grace they set for us even after they leave the office.

Rest in Peace Gerald R. Ford.  May God take care of your widow…